The Circle Of Fifths

A fast way to learn how music works

The circle of fifth is a magical tool that teaches you to create great chord progressions. The circle also teaches you how to transpose songs to new keys and it can help you when you want to figure out which notes are sharps or flats in any key.

Such a powerful tool is of course worthy of your attention. This is why the circle of fifths is one of the pieces of musical knowledge that you should really study and internalise.

What is the circle of fifths?

The circle of fifths was invented by Nikolai Diletskii during the 1600’s in his guide to composition which he called “Grammatika”.

What Diletskii did was to take the fifth note in every major scale and then map them out in a circle. The circle includes all 12 notes in the chromatic scale and they are orderly placed based on how close they are musically to each other.

A fifth, as you might remember from our article about the major scale, is the second simplest interval in music next to the octave. A fifth vibrates 3 times every time that the root of the scale vibrates 2 times.

What Diletskii did was to show us the relationship between fifths in an easily digestible way.

Since the fifth has such a simple relationship to the root it is said that the notes harmonize, and that they are consonant. This basically means that the root and the fifth creates a beautiful sound when they are played together.

We keep moving like this until we finally come back to C from F. 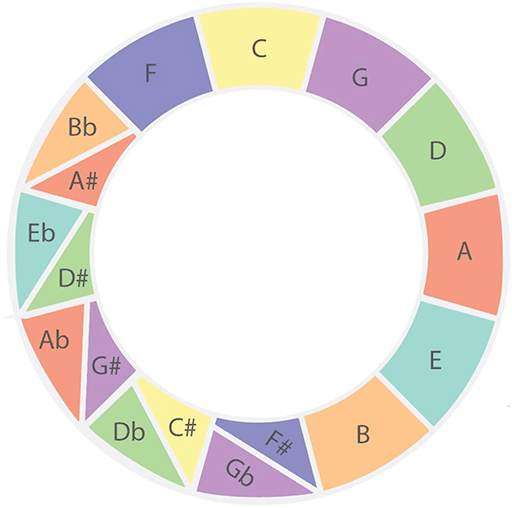 Among other things the circle of fifths show us that G is closer to C than to B, musically speaking. This means that G major is more consonant with C major than B major.

By looking at the circle you can find out the fourth note in any scale you want, just pick the root note and to the left you have the fourth.

I-IV-V is one of the most common chord progressions in classical music and in blues. Look at the circle and pick a chord (this is your root).

Use the chords on each side of the root and you have the basis for a song. Just include a rhythmic pattern and play around for a couple of minutes and you have written your very own song!

How to pick out the chords in a diatonic scale

If you are familiar with using roman numerals to represent chords, you know that the I-IV-V are major chords. This is indicated by the fact that they all are written in uppercase letters. You may also know that all major chords are not included in all major scales.

To figure out which chords are included in any given scale, you begin with the root. To the left of the root is the fourth and to the right is the fifth, these are your major chords.

The minor chords in C are: Dm, Am and Em.

You will find the diminished chord of the scale right after the minor chords. In the case of C major, this is B diminished.

The seven basic chords that you can play in the key of C are: 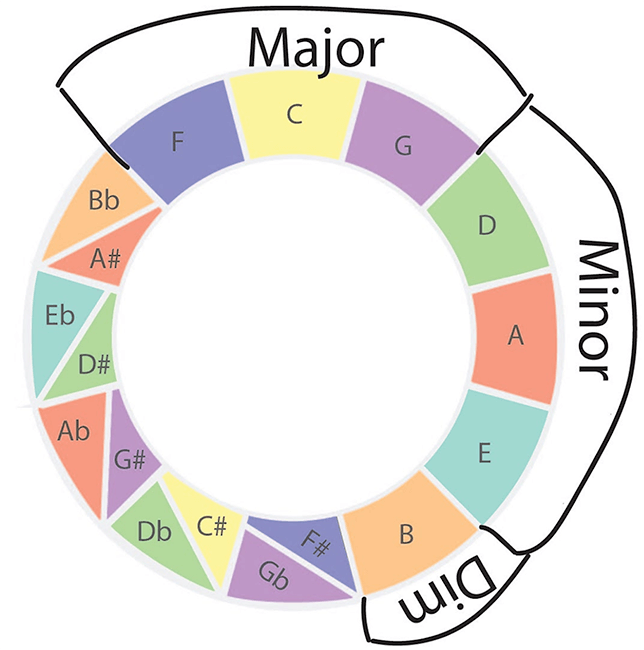 How to find relative scales

If we rotate the circle 3 steps to the left and put it in the center of itself, so that A ends up below C, we see the relative major and minor scales. 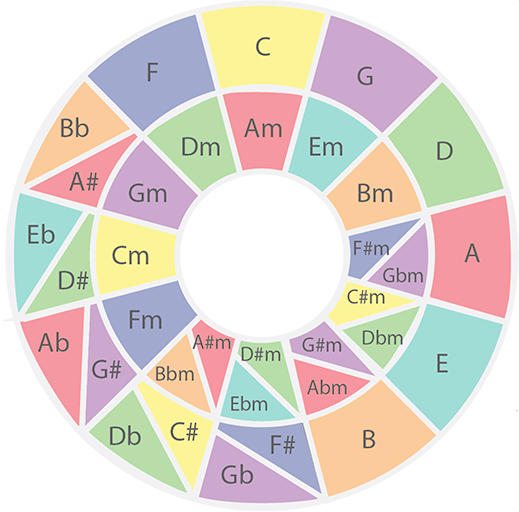 The C major scale and the A minor scale use the exact same notes, that’s why we say that they are each others relative scales. The same relationship exists between every major and minor scale that are parallel in the circle.

You can see which chords belong in any key. Pick out a small piece of the circle to get the chords that correspond to the chosen scale. 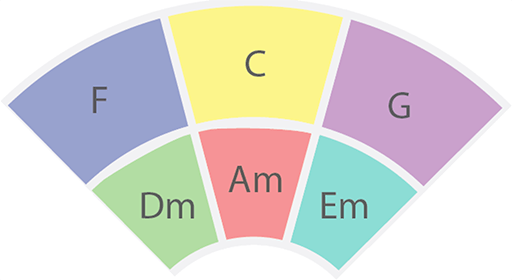 How to transpose songs using the circle of fifths

Let’s say you have a song that you know is in C major, but you want to play the song in E major, a key that is often preferred by guitarists. Transposing the song between these keys can be done by using the circle of fifths. 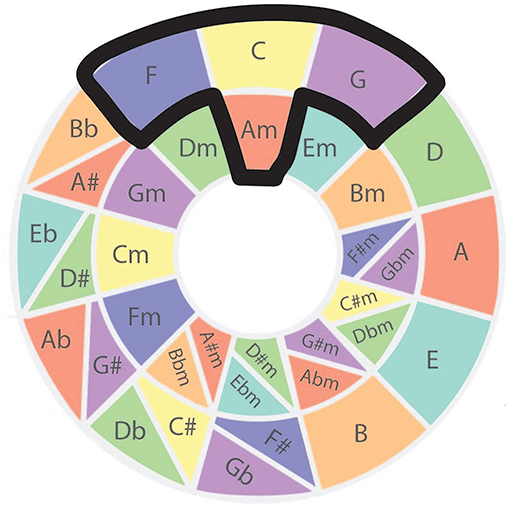 All you have to do to change key is to move this pattern over to E major: 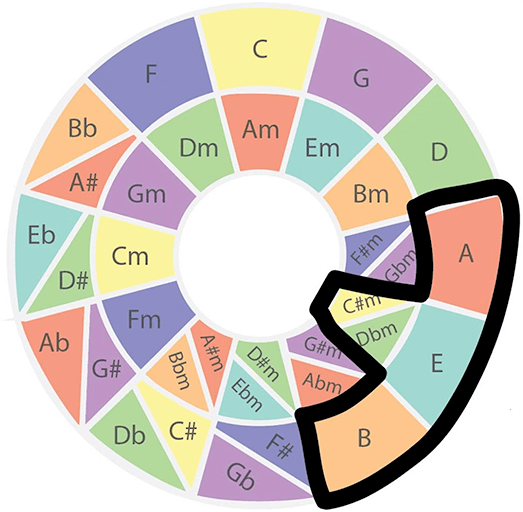 In a matter of minutes you find the corresponding chords in the new key and can thus transpose the song from one key to another.

How to find sharps in any key

The scales C major and G major are very similar. In fact, there is only one note that differs between these two scales, the 7th note in G major is an accidental. B major on the other hand is quite far from C major musically and has five accidentals in it.

An accidental is either a sharp or a flat note and you can use the circle of fifths to figure out which notes are sharp or flat in any key. Let’s start with figuring out notes that are sharp.

To figure out which notes are sharp in a key we originate from F in the circle. We start at F and rotate clockwise to find sharps for all keys.

You can memorize the first half of the circle, from F and downwards: FCGDAEB

It will probably be easier to remember as a mnemonic, so try to come up with a mnemonic yourself or you can use this one: Fights Can Go Down At Every Bar.

To find the sharps in B major, we move five steps since B is in the fifth position of the circle. This gives us: F♯, C♯, G♯, D♯ and A♯.

Use the same rule for G major and you’ll see that the sharp note is F♯. G is in position one of the circle so you only take the first sharp from the mnemonic which is F. Quite simple and very powerful!

You can use this rule to find sharp in any key down to C♯ which has 7 sharps in it, this means that all notes in the key are of C♯ ar sharps. Practice using the circle of fifths by figuring out which sharp notes are located in all keys from G to C♯.

How to find flats in any key

To find out how many flat notes are included in a key you start by moving counterclockwise from C. C is in position zero and F is in position one when we move counter-clockwise. This tells us that F major has one flat note.

To find out which notes are flats in the key we start at B and move counter-clockwise. The series to remember for flats is: BEADGCF 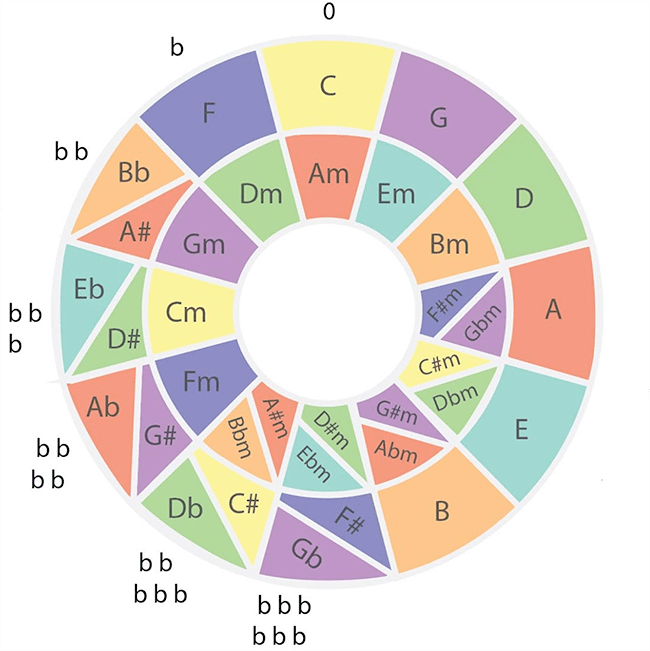 I find this is a bit easier to remember as it has BEAD in it, so a mnemonic that looks like this works for me: BEADs Got Carroll Furious.

This gives us the information that the flat note in F major is B♭.

Ab major is in the fourth position counter-clockwise from C so there are four flats in Ab major. Just by looking at the circle and remembering this rule, you get that those four notes are: B♭, E♭, A♭ and D♭.

Try to figure out which flats are included in all the scales on the left side of C, all the way to C♭ which has 7 flats in it.

Here you have all major scales represented as a table:

How to use the circle of fifths to create chord progressions

Using the circle of fifths, we can find out which chords are I-IV-V in any given scale. The IV and V are located directly to the left and right of the root. 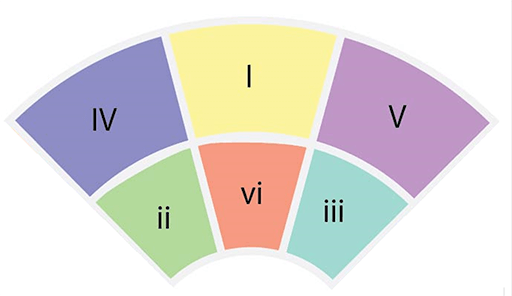 With this knowledge you can try to create song with the following chord progressions for different keys:

You can also cycle through the circle of fifths to learn how different chords relate to each other.

It is foremost your ears that will tell you what works and what doesn’t in music. Practice your ears by playing around with the circle, try different things and have fun. The circle of fifths can really help you to understand songwriting on a deeper level. Have fun with it and create some music.